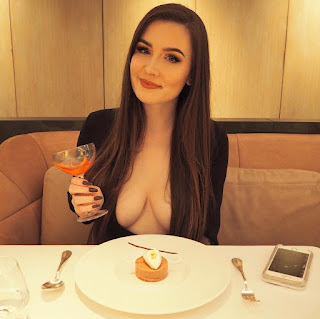 Eversince the Great Shift landed Sam in some girl's body his life has turned upside down. At first it was hard for him to be a girl, he had no idea on how to put on make up, put on bras, and other girly things.

Bt after some time went by, he had settled into his new body and assume his new identity. Her name is now Samantha, and she still had her knowledge as a guy so she could benefit from her new body. And right now she has the best time of her life.

She picked guys from dating apps, any guys. Guys who weren't affected by the great shift, even guys that used to be a girl before th great shift. Because she knew what they want, just show them a bit of cleavage and flirt a bit with them and she got her free meal for the night. If she's feeling adventorous maybe she could even get some 'dessert' from those guys.
Posted by Jesse Marks at 9:13 AM