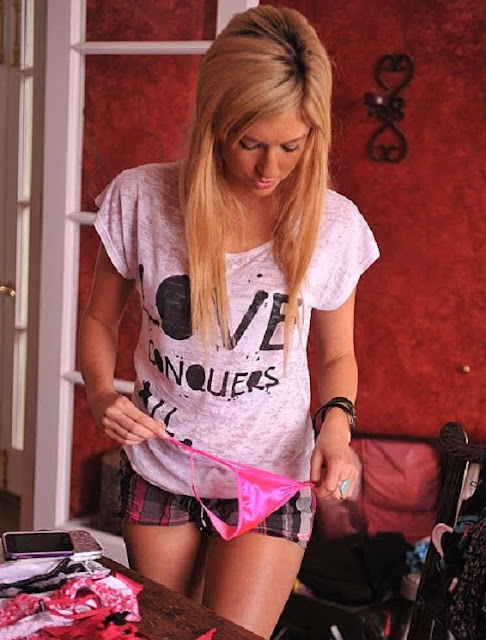 Oh my God. Katie really wants me to weare these? I mean this looks really uncomfortable to wear. Damn it! I can't belive how reckless I was and actually mistook my buff pills with female super hormones. You see when winter was about to end I decided to start working on my dream summer body. I knew I won't be able to make it on time so I decided to use some help and bought those buff up pills that were supposed to change me into a handsome stud before the summer even starts. At first the effect was amazing. I quickly begin to loose fat and gain muscle mass but that was only until I ordered the next dose. The site was in chineese and because of it I ordered the wrong thing. I noticed something is not right when the effect got opposite. Instead of gaining muscles I was begining to loose them. My frame was becoming fragile and petite and I actually got shorter. Still I keep taking those pills hoping they will stop whatever was happening.

Weeks were passing and I was only becoming thinner. When my waist got narrow and I started to grow breasts I went to see a doctor who quickly realized what was the cause of my changes. To my shock the changes were irreversible and I could either live looking like a feminized boy or keep swallowing the pills and let the changes to continue until I become a chick. I had no idea what to do so I asked my girlfriend who to my surprise said to keep taking the pills. I didn't know why she insisted so much but I followed her suggestion and watched as my body is changing. I was developing more feminine features, my breasts keep growing and my dick was getting smaller until it dissapeared. My face became more feminine until I couldn't be recognized as a man anymore. Finally after three months I was fully transformed.

It wasn't the end of my adventures. My girlfriend, who now is my friend and roommate since she doesn't have any romantic feelings for me anymore, decided to make a real girl out of me. She replaced my old male clothes with female ones. She taught me how to do makeup, she dyed my hair blonde and keeps calling me Natalie. I don't know if she is making fun of me or she really intends to make me like a real chick but she keeps taking me out to the clubs where she tries to hook me up with some random dudes. The thing that scares me is that I'm actually starting to find some of the guys hot and if things will keep going like this I will eventually end up sleeping with a guy sooner or later.
Posted by Marti's tg captions at 11:15 AM